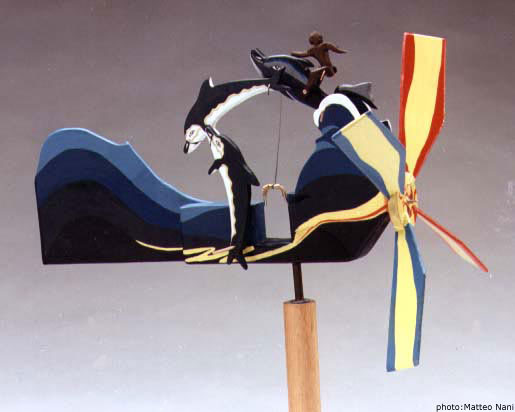 They relate that Arion of Methymna, who as a player on the harp,

was second to no man living at that time, and who was, so far as we

know, the first to invent the dithyrambic measure, to give it its

name, and to recite in it at Corinth, was carried to Taenarum on

the back of a dolphin. He had lived for many years at the court of

Periander, when a longing came upon him to sail across to Italy and

Sicily. Having made rich profits in those parts, he wanted to

recross the seas to Corinth. He therefore hired a vessel, the crew

of which were Corinthians, thinking that there was no people in

whom he could more safely confide; and, going on board, he set sail

from Tarentum. The sailors, however, when they reached the open

sea, formed a plot to throw him overboard and seize upon his

riches. Discovering their design, he fell on his knees, beseeching

them to spare his life, and making them welcome to his money. But

they refused; and required him either to kill himself outright, if

he wished for a grave on the dry land, or without loss of time to

leap overboard into the sea. In this strait Arion begged them,

since such was their pleasure, to allow him to mount upon the

quarter-deck, dressed in his full costume, and there to play and

sing, and promising that, as soon as his song was ended, he would

destroy himself. Delighted at the prospect of hearing the very best

harper in the world, they consented, and withdrew from the stern to

the middle of the vessel: while Arion dressed himself in the full

costume of his calling, took his harp, and standing on the

quarter-deck, chanted the Orthian. His strain ended, he flung

himself, fully attired as he was, headlong into the sea. The

Corinthians then sailed on to Corinth. As for Arion, a dolphin,

they say, took him upon his back and carried him to Taenarum, where

he went ashore, and thence proceeded to Corinth in his musician’s

dress, and told all that had happened to him. Periander, however,

disbelieved the story, and put Arion in ward, to prevent his

leaving Corinth, while he watched anxiously for the

return of the mariners. On their arrival he summoned them before

him and asked them if they could give him any tiding of Arion. They

returned for answer that he was alive and in good health in Italy,

and that they had left him at Tarentum, where he was doing well.

Thereupon Arion appeared before them, just as he was when he jumped

from the vessel: the men, astonished and detected in falsehood,

could no longer deny their guilt. Such is the account which the

Corinthians and Lesbians give; and there is to this day at

Taenarum, an offering of Arion’s at the shrine, which is a small

figure in bronze, representing a man seated upon a dolphin.

Look at our catalog

Arion and the Dolphin

Arion and the Dolphin